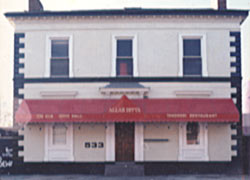 An emblem of trust, quality and professionalism, Noshahi Civic Center Birmingham was the brain child of Chaudhary Allah Ditta Noushahi who had dreamt of constructing a center that would serve the social, cultural and religious requirements of Muslim community of United Kingdom in Particular and English community in general.

The center was established in 1992 but its inauguration was kept pending till January 1993; the main reason behind it was the desire that its inauguration be carried out by the hands of Sahibzada Mahboob Hussain Noushahi; the spiritual leader of Chaudhary Allah Ditta Noushahi and his family.

Sahibzada Mahboob Hussain Noushahi was on his spiritual visit to UK during 1992 – 93, when Chaudhary Allah Ditta Noushahi and his wife requested him to honor them by inaugurating their center.

Sahibzada Mahboob Hussain Noushahi was kind enough to accept their request and named this center as Noshahi Civic Center. Since then NCC has been providing quality service to its valued customers and carrying forward the mission successfully which its founding father had envisioned.